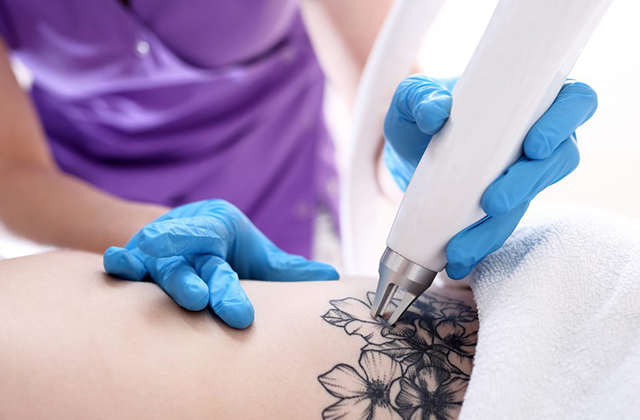 Though lasers are helpful, efficient, and effective when it comes to tattoo removal, there are a bunch of misconceptions about it. As we enter the second decade of the 21st Century we can look back at all the technological, social and medical advancements made in the last 10 years. For those who suffer from tattoo regret one area of advancement that they can thank medical science and ingenuity for is new and improved ways to lower the cost of tattoo removal.

Tattoos have been around since man first learned how to control and use fire to improve the human condition on Earth, but it wasn’t until the last century that forms of tattoo removal began to make great strides in effectiveness without leaving severe scar tissue. Prior to the late 20th Century, to endure a tattoo removal procedure a person had to endure a process that could be painful and only partially effective. As tattoos became the fashion in the 1990’s more time, effort and money was devoted to finding new methods and refining and improving the methods that were already in existence.

Along with an increase in the popularity of tattoos there developed an increase in what is now referred to as tattoo regret. This added pressure to find an easy, effective and affordable method of tattoo removal grew the the size of the tattoo removal industry and with that an increase in research and development spending to find the perfect tattoo removal product. Most of the products were of the home tattoo removal variety. Some, like TCA, worked well to little fanfare, while others promised the moon and delivered little to nothing as a tattoo removal agent, but were, and are still highly promoted as painless, convenient and hassle free cream removal systems.

Below is a short list of items that, subjective though they may be, can be a root cause of tattoo regret.

These are questions, that for the most part, can only be answered in the mind of the person living with the mistake permanently lodged beneath their skin.

Laser, RST and Other Methods

Laser removal, which was first developed in the 1980’s, was at first very crude, painful, not very effective and almost certainly left a scar on top of unremovable tattoo pigment. Today, laser removal is a very much improved yet still imperfect tattoo remover. Modern Laser technology has still not been able to come up with a solution to conquer and remove light pigmented tattoos. The problem stems from the fact that laser light, indeed any form of light, has a tendency to be reflected by light colored objects, including tattoo pigments, and to be absorbed by dark colored objects, also including tattoo pigments. As this article is being written lasers still are most successful at removing black and dark blue tattoo ink.

Hopefully, some day, using lasers for tattoo removal at a price everyone can afford will be a reality. Until that time those looking for a product that will remove all tattoo colors will have to rely on excision, dermabrasion, regenerative skin treatment (RST), salabrasion or TCA. Of these sure ways to remove all tattoo pigment, excision and RST are the most expensive and excision can leave scar tissue at the site of the surgically removed tattoo.

Physician performed dermabrasion will definitely remove a tattoo, but requires one or more office visits, pain and probably a scar. The tattoo removal cost using this method is quite expensive since it is considered an optional procedure by insurance companies and not covered by any insurance policy. Salabrasion is a home tattoo removal procedure, but not for those with low pain thresholds since it involves sanding the skin above the tattoo until the ink is removed. It involves creating a wound and then rubbing salt into it until all skin above the tattoo has been removed and the pigment is sanded away. Not a good option.

That leaves a previously unmentioned method, tattoo removal cream, and TCA tattoo removal. The cream removal method was not included because these products have never been proven effective for complete tattoo removal and the Mayo Clinic has said they are ineffective. That leaves TCA.

TCA tattoo remover is known to be an effective way to remove tattoo ink. Two medical studies have proven the method a reliable one and it is also used to remove various types of skin blemishes including acne scars, warts, age spots and is used by Cosmetic Surgeons and exclusive Health Spas to perform facial peels to remove fine lines and wrinkles.

When the cost of tattoo removal is a factor, TCA is one of the most cost effective products available. A tattoo removal using other methods can run into the hundreds or even thousands of dollars, but with TCA an average size tattoo can be removed for less than $40.00. Just read and follow instructions for a successful tattoo elimination.

Glen Wilson has over 20 years experience in the tattoo industry, both as an artist and shop owner and in recent years has become an expert in the many forms of tattoo removal. He currently serves as a consultant to http://www.Nuviderm.com and knows from personal experience that Nuviderm is one of the best at home tattoo removal products on the market.